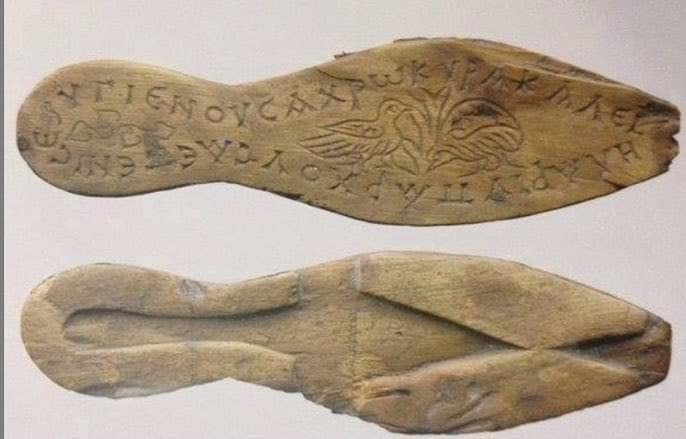 The 1,500-year-old Byzantine sandals with a sweet Greek message

A pair of Byzantine-era sandals discovered during an excavation in Istanbul has become one of the main attractions of the city’s Archaeological Museum. The sandals have a message in Greek which reads: “Use for health, madam, wear in beauty and happiness.”

The astonishing find was discovered during excavations initiated by the Marmaray Project, the underwater rail tunnel connecting the Asian and European sides of Istanbul under the Bosphorus.

The excavations, which began in 2004, have revealed new historical aspects of Constantinople, the capital of the Byzantine Empire. Some 60,000 artefacts unearthed over a period of approximately nine years are kept in Istanbul Archaeological Museum until a special museum is built for them, the Turkish newspaper Daily sabah reports.

The Byzantine Empire was the continuation of the Roman Empire in its eastern provinces during Late Antiquity and the Middle Ages. It survived the fragmentation and fall of the Western Roman Empire in the 5th century AD and continued to exist for another thousand years until it fell to the Ottoman Empire in 1453. For most of its existence, the empire was the most powerful economic, cultural, and military force in Europe.

Byzantine sandals belonged to a woman

Scientists say the sandals discovered are over 1,500 years old and belonged to a woman. The Byzantines loved color and patterns, and they made and exported very rich patterned fabrics, especially Byzantine silk, which was woven and embroidered for the upper classes and resiliently dyed and printed for the lower classes.

Modesty was important to everyone, and most of the women seemed to be almost entirely covered in rather shapeless clothes. There was a considerable amount of footwear salvaged from this excavation project, with sandals, slippers, and mid-calf boots commonly seen in handwritten illustrations also found during the excavation. Many objects are richly decorated in various ways.

The color red, reserved for imperial use in men’s shoes, is in fact by far the most common color for women’s shoes. Handbags are seldom seen and appear to have been made of fabric to match the dress, or perhaps tucked into the belt.

Excavations have found the first traces of civilizations from different periods, including the skeletons of the early Istanbulites; 8,500-year-old footprints â€the port of Eleutheros (Theodosius), a port known in world literature but of which no trace has been found before; and the largest collection of medieval sunken ships in the world, as well as 60,000 animal bones from 57 species as well as plant fossils.

The port of Eleutherios, which was one of the ports of ancient Constantinople, is located under the modern Yenikapi district in Istanbul. It was built at the mouth of the Lycus River, which ran through the city to the Propontis.

The port was built at the end of the 4th century, during the reign of Theodosius I, and was the city’s main trading point in Late Antiquity. It continued to be used until the 11th century. The Lycus silt eventually filled the harbor entirely and the area was later converted to agricultural use due to the effects of erosion and upstream deposits. During the Ottoman era, the area was completely rebuilt.

In November 2005, workers on the Marmaray project discovered the silted remains of the port. Excavations have produced evidence of the 4th century Portus Theodosiacus. There, archaeologists discovered traces of the city wall of Constantine the Great and the remains of more than 35 Byzantine ships from the 7th to 10th centuries, including several Byzantine galleys, the remains of which had never been found before.

In addition, excavations uncovered the oldest evidence of settlement in Constantinople, with artifacts including amphorae, pottery fragments, shells, pieces of bones, horse skulls and nine human skulls found in a sack, dating from 6000 BC.

Related: Greeks of Constantinople: The Cosmopolitans of the Byzantine Capital

The best winter sandals and how to wear them correctly