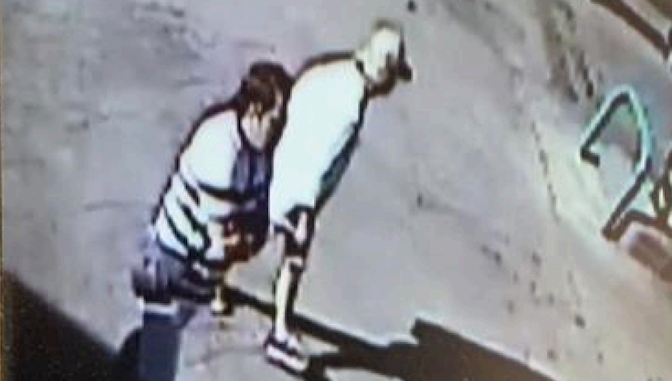 The man and woman in this photo are suspected of trying to steal the wallet of a woman who was walking down El Camino Real in Palo Alto, police said.

A woman holding a pouch on a shoulder strap was walking south on the west side of El Camino in the 3900 block (between Happy Donuts and Los Robles Ave. in the block that includes the Buena Vista Mobile Home Park) around 6:20 p.m. Thursday, according to the police.

She felt the clutch flap open then the clutch lighten, police report.

She immediately turned around and saw a woman holding her wallet which was in the pocket. There was a man behind the woman. The victim had not previously noticed them walking behind her.

The victim, who is in her 50s, immediately grabbed the suspect’s wrist, causing the wallet to fall. The victim retrieved her wallet and told the couple she was going to call the police. The victim was not injured.

The victim described the suspect as a white female, between the ages of 35 and 50, about 5 feet 4 inches tall with an average build and a blonde ponytail. The victim said she did not know the race of the man but was heavyset, between 35 and 50 years old. He had his hair slicked back and wore a striped polo shirt.

Spice up your summer look with these stylish handbags

These trendy handbags will enhance your everyday look!