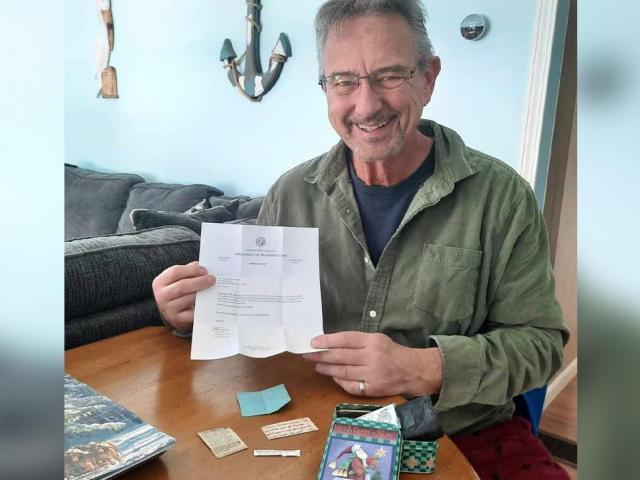 Nashville, North Carolina — Scott Curri lost his wallet last spring when he was stopped at an Interstate 95 exit near Rocky Mount.

His phone rang, and as he fumbled to take the call, he put his wallet on the roof of his Volvo. It was only a few hours drive from his destination in Florida that he realized he had never picked it up.

“It wasn’t in the doorway where it was supposed to be,” said Curri, a 65-year-old semi-retired boat mechanic.

Six months later, NCDOT employee Bobby Liverman found the wallet in his work vehicle. He was investigating a drainage complaint in Nashville when he dug through the glove compartment for a towel to clean his sunglasses and found the black leather wallet belonging to Curri.

Liverman used the address on Curri’s driver’s license to send her a letter telling her about the wallet. Unfortunately, this address was out of date and the letter was returned by post in early November.

When the snail mail failed, Liverman asked one of his office assistants, Sybil Stancil, to help locate Curri. Stancil searched for her name in her spare time over the next six weeks, calling numerous wrong phone numbers in the process.

Then, around Christmas, Stancil found Curri’s wife, Diane, on social media. Curri, who thought her wallet was long gone, was surprised to get her phone call.

After asking Curri to describe the contents of the wallet, Stancil sent it to his new address in South Glen Falls, NY, in a Christmas gift box.

When Curri received the box, his money was gone, but the important items were still there, including a handwritten paper heart-shaped cutout of his wife reading, “A hug and a kiss for you,” and a signed photo. of his mother, who died in 2016.

“Money and stuff didn’t matter,” Curri said. “But everything else was irreplaceable.”

Curri wanted to thank Stancil and Liverman, so he contacted the NCDOT Communications Office to ask if they could share this story.

“Sybil is the kind of person who maintains faith that everything will be okay,” Curri said. “He’s a good person, who does the right thing.”

Is it ‘kumbaya’ at SD Capitol on housing?