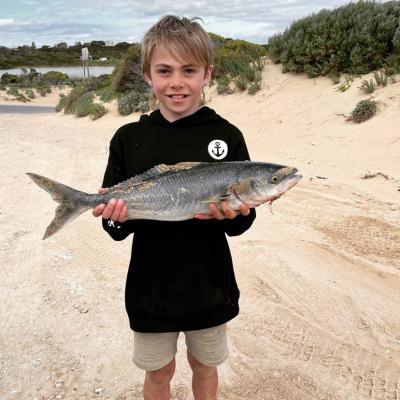 Fishermen delighted with the calm weather

The good weather of the weekend made the happiness of the fishos of the south-east.

Calm seas and gentle winds made it possible to spend beautiful days on the water and lots of fish were caught which is nice to see.

Offshore fishermen have found a good number of fish with beautiful gummy sharks and schools landed.

Gummy sharks weighing around 15kg were taken on board, while some of the schoolchildren exceeded the 20kg mark.

The reef fish were also chewable.

There have been rumors of barrel tuna reappearing off Geelong this past weekend, making it a bit hot and sweaty for some of our big game fishermen to think they are making one last descent towards the west.

We can only hope, but we’ll make sure to let everyone know if we hear of anything.

The surf fishos loved the weather on the weekend from Saturday arvo once the wind died down and despite a few patches of rain the conditions were just about perfect for the beaches.

There have been more gummy sharks caught this week and just like in recent weeks they have been well distributed.

The fish have come from Piccininni Beach to Browns Bay, Nene Valley and Canunda National Park.

They all come in different sizes, ranging from a size under about 10kg and everything in between.

Salmon is still plentiful in all areas.

I’ve seen crackers over the past week, some probably pushing the 3kg mark.

There were no hot spots for the bigger fish, with most taking big baits meant for something a little bigger.

Young gunslinger, Riley Haines of Beachport pulled off a few rippers over the weekend in his area and it’s great to see the kids getting involved.

There have been plenty of ‘lumpy’ sized salmon again this week, from Nene Valley to Carpenter Rocks and then back to the Beachport Salmon Hole.

They should stay a little longer, so get in there.

The whiting got underway this weekend with beautiful fish coming from all over the southeast.

The boats have done their best so far, but once we start having decent tides again in the evening the guys ashore will really get to work.

Those who stroll the early morning beaches around Cape Douglas have found beautiful fish in the first gully over the past week or so, managing their half-dozen or more in an hour or two.

I’m now getting a few reports from Beachport and Southend as well, so there must be a few starting to pop up in those areas.

If you are that way, it is definitely worth having a crack.

Squid numbers remained excellent over the weekend in Livingstons Bay – the only secret at the moment seems to be getting out as soon as possible.

Sunrise until around 7 a.m. has been hot bite time so far this year, so if you can get in early and early.

There are still calamari at the end of the arvos and the tide changes so if you can only get down later in the day it is still worth it.

There have been some beautiful garfish caught there by the boats over the past week or so, with some anglers managing their bag of fish in just about an hour.

Size was great again, so it’s time to crack.

Waders do well in Livingston and Cape Douglas during tidal changes and again the size is nothing to laugh at.

Tommies and red mullet weren’t too bad in both places either, so once you have your boy, have a crack for the others.

Drop Nets have had a blazing start to the season so far.

I know guys who have hit 6-8 crays for a few trips now.

The size has been a good average for the most part, with fish already a few pounds.

Divers and snorkelers also got in on the action last week, with some great lobsters and also beautiful abalone.

The Glenelg River always fishes well for bait and lure fish in our section of South Australia, with some nice bream and perch on the boat.

Cranka crabs still make up their fair share of the bream, while deep-diving minnows, metal blades, and heavy plastics do a number on the perch.

News from Mulloway in South Africa has been slow, but the Victorian guys in the estuary are nailing beautiful fish trolling live mules behind the putters.

I haven’t heard of any sizes, but when they say they’re beautiful fish, I believe them.

Hopefully a few of these fish go upstream and we can get a crack.

Every now and then we hear about an unexpected catch in the river and this week it’s about a healthy little gummy shark captured by Trav Younghusband in the Dry Creek area.

Trav said there was another hook ripped out of the shark’s mouth, so they must be tough little buggers.

The forecast for the weekend seems to be pretty fishy for the most part.

Later this week the seas are almost dead, so now will be the perfect time to drop a line.

Until next week, safe fishing.

Is the Ridge Wallet Right For You?