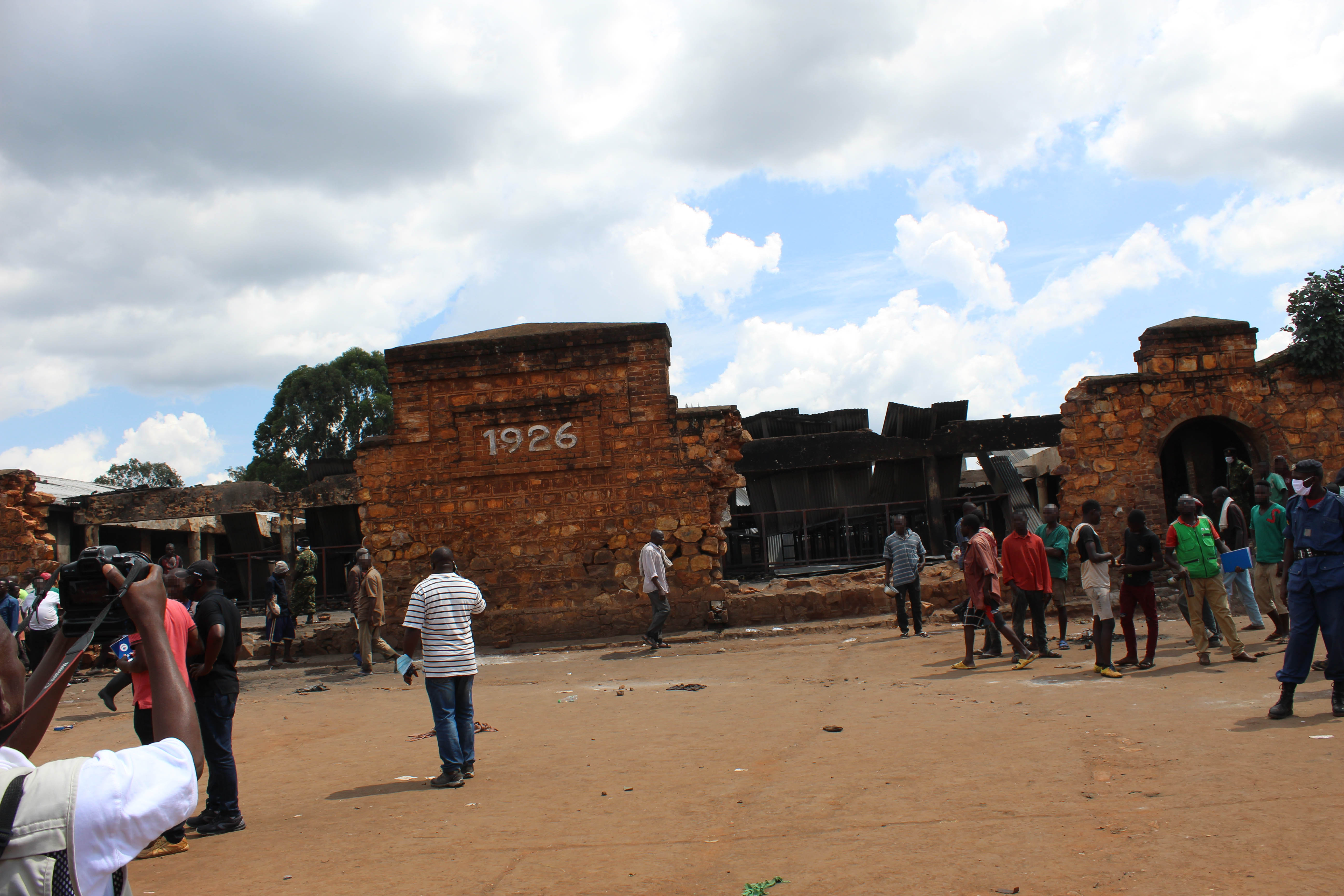 Burundi: account of the dead in the fire of the Gitega prison

Authorities failed to conduct a transparent, credible and impartial investigation into the fire to examine the circumstances in which it started and spread, the authorities’ response and failure to evacuate prisoners, and accurately count and identify the dead and injured. They must communicate their findings transparently – including the names of the dead and injured – and fairly prosecute anyone who can be held responsible, if necessary. They should also provide survivors and family members of victims with compensation, medical care and mental health support.

“More than a month after the Gitega prison tragedy, the government has failed to provide a full and truthful account of what happened and has failed to treat the family members of the deceased with dignity. said Lewis Mudge, Central Africa director at Human Rights Watch. “The lack of information on the true number and identity of the victims only adds further pain and distress at an unimaginable loss.”

The fire broke out around 4 a.m. on December 7, in the prison of Burundi’s political capital, and spread several blocks away; large rooms that can accommodate up to several hundred prisoners. According to three prisoners interviewed and two other sources who have been inside the prison since the fire, block 4, which is believed to have housed more than 250 prisoners, was the most affected. Prisoners trying to flee the flames broke through a wall. Prisoners also said no evacuations took place until emergency services arrived between 5:30 a.m. and 6 a.m.

“In our block, many survived,” said a prisoner interviewed by telephone. “But in other blocks they didn’t wake up in time and many died. The guards arrived at 6 a.m., but by then it was too late. Between 4 a.m. and 6 a.m., there were only the prisoners and the fire. Two other prisoners and a lawyer who spoke to two clients detained at Gitega prison confirmed this account. A prisoner said that in Block 2, many prisoners were suffocating from inhaling smoke.

After emergency services arrived, Vice President Prosper Bazombanza told reporters at the prison that the fire had killed 38 people but did not identify them. The Ministry of the Interior said on Twitter an electrical short circuit caused the fire. A few weeks later, on December 29, President Évariste Ndayishimiye said that 46 people had died, some of whom died in hospital. However, prisoners and other sources told Human Rights Watch they believed the death toll was higher. They said no investigation or roll call was conducted at the time of Bazombanza’s announcement.
“The government figures are lies,” a prisoner told Human Rights Watch on December 11. “The real death toll is between 200 and 400… Since yesterday, prisoners have been returned [inside] so we can see who is missing.

Prisoners and two other sources present when the bodies were removed said they were transported in large plastic tarps, some containing the remains of several bodies. Sources there at the time said the remains were buried in bags in mass graves on the evening of December 7 without any attempt to identify them.

On January 7, 2022, Human Rights Watch spoke with family members of three prisoners, two of whom are believed to have died in the fire. The wife of a missing prisoner, mother of three, said she went to Gitega the morning after the fire, struggling to pay for her transport: “When I arrived, I found other people looking for their relatives. The authorities told us that they would communicate with us later… Until today, I had no news from them. I can’t afford to go back.

She said a prisoner who survived the fire informed her that her husband’s block had been destroyed in the fire and that he had died: “My children are traumatised…I tried to explain that their father is dead, but they don’t. understand why we didn’t bury him. Yes [the authorities] could at least officially tell us who died, maybe that would help them.

The 47-year-old uncle of a missing detainee said he had been to Gitega prison twice since the fire but authorities had given him no information. “Authorities lie when they say they buried the dead with dignity,” he said. “We learned that they had buried them in mass graves. My nephew was being held in block 4… and a friend from the prison told me that it had been completely destroyed by fire. We communicated regularly with my nephew, but since the day of the fire, we have not received a single message from him. We believe he is dead, although we have not received any official information.

An independent investigation should clarify the facts surrounding the fire, including any factors or practices that may have led to the deaths, Human Rights Watch said. Relatives of victims should be involved in the process. They should receive legal assistance, have access to the file and, if the State’s responsibility is established, be compensated. Having a reliable account and a better understanding of the circumstances surrounding the death of their loved ones could help relatives cope with their suffering, Human Rights Watch said.

The lack of a credible and transparent investigation into the Gitega fire underscores the urgent need for a thorough review of the government’s human rights record, Human Rights Watch said.

This tragic incident also highlights the persistent and systemic problems of the Burundian prison system. Gitega also had a fire on August 21, apparently due to an electrical short circuit, but it was extinguished before there were any casualties. At the time of the two fires, the prison housed more than three times its maximum detention capacity.

According to the Association for the Protection of Human Rights and Detained Persons (APRODH), a human rights organization in exile that monitors human rights violations and the rights of prisoners, approximately 40% of those detained in Gitega prison in October were in pretrial detention. detention. Some detainees in Burundi have served their sentences or been acquitted, but have not yet been released due to an inefficient, corrupt and politicized judicial system.

Many detainees in Gitega and other prisons in the country have been sentenced on the basis of their peaceful political activities. A March 2021 presidential pardon announced the early pardon or release of more than 5,000 prisoners, but excluded many accused of security offenses, many of whom were arrested following the 2015 protests against the candidacy. of the former president to a third term and are being held for political reasons. About 3,000 have been released since the announcement, according to a credible source.

On December 29, President Ndayishimiye said that a report on the fire was being prepared and that judicial authorities should issue judgments and speed up legal proceedings, and that suspects charged with non-serious criminal offenses should be released from pre-trial detention. Since then, Human Rights Watch has received credible reports that some defendants charged with less serious offenses have been released from several prisons, including Gitega.

The government should immediately address dangerous prison overcrowding by releasing all prisoners held for exercising their basic rights and those detained arbitrarily, including those who have served their sentences or who have been acquitted, Human Rights Watch said.

Under international law, government authorities have a duty to care for incarcerated people, including an obligation to protect their rights to life, health, safety and security. The African Commission on Human and Peoples’ Rights, in its 1995 resolution on prisons in Africa, stated that African countries should comply with “international norms and standards for the protection of the human rights of prisoners “.

The United Nations Standard Minimum Rules for the Treatment of Prisoners (Mandela Rules) state that prisoners should be treated with dignity and have prompt access to medical care, and that in the event of death in custody, the prison will report the cases to independent authorities. judicial or other authorities to ensure a prompt, impartial and effective investigation. The African Commission on Human and Peoples’ Rights and the International Covenant on Civil and Political Rights oblige governments to investigate and appropriately punish those responsible for abuses against those in detention and provide reparations to victims .

“This tragedy should serve as a wake-up call,” Mudge said. “Further delays in tackling prison overcrowding and appalling prison conditions will put more lives at risk. The government should urgently release prisoners who have no reason to be detained and transparently investigate any failure by prison authorities to protect prisoners’ rights, including the right to life and access to justice and accountability.