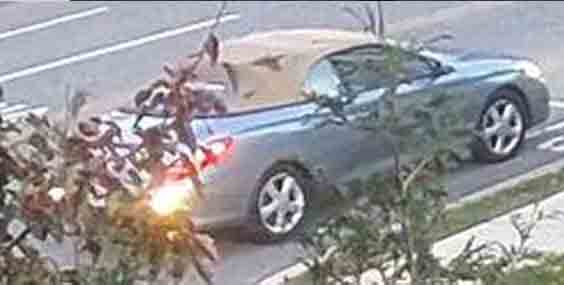 A stealthy thief in Haverford Township pulls a wallet out of a woman’s purse as the victim eats at a restaurant.

HAVERFORD — Police have a lead in a pickpocketing crime that recently hit a restaurant in Haverford Township and investigators are asking for the public’s help in locating the suspect.

According to a crime awareness bulletin posted on social media, a woman quietly stole a wallet with credit cards from a customer’s purse while he was at a restaurant on October 15.

The suspect then used the stolen credit cards in stores at Manoa Mall within 45 minutes of the robbery.

The woman arrived and left the area in the vehicle pictured which appears to be a 2008 Toyota Solara with tan convertible upholstery. The suspect vehicle was driven by a tall black man.

In the weekly township police blotter, a pickpocket was reported at the Brick and Brew along East Eagle Road on October 16 at 1:21 p.m.

The victim reported that her wallet was stolen from her purse while she was eating. The wallet contained credit cards, a social security card, a driver’s license and $20. Several unauthorized purchases were made with credit cards, police said.